LAGER Can and Conservation Work in Rohais Woods

LAGER Can and Conservation Work in Rohais Woods

One day last autumn, LAGER Can Group Leader Cathy Swift and I went litter picking along Horsenden Lane and, whilst bemoaning the regular flytipping, we had the notion to use some of the rubble and soil to build some sort of wall on the S-bend – one of the spots favoured by tippers.  Unbeknownst to us just such a construction – a bund – was the wish of the local Park Ranger, Jon Staples. He had a vision to recover the woods and reduce the rubbish and abuse blighting the area.  So began a cooperative venture involving various groups of volunteers. Regular LAGER Can participation led to our group of Hillbillies expanding our efforts into conservation with clearance and planting following direction from the Ranger.

The following piece recounts the progress so far.

Until last summer these woods, on the south-west side of the lane, were pretty much impenetrable, and were blighted by large quantities of fly-tipping and litter.  The woodland was dark with ivy due to poor light levels, and the woodland flora was unable to flower. Since then, dedicated volunteers from LAGER Can, Friends of Horsenden Hill, Green S Welfare UK and The Conservation Volunteers, together with help from Luna the working horse and her owner Dan, have worked closely with Jon, to prevent fly-tipping and to recover and restore both the woods and the fascinating remains of the gardens.

In order to make it difficult for fly-tippers, a through path was created parallel to the lane for almost the entire length of the woods to create natural surveillance and provide access. Then, earth and rubble walls were constructed beside much of the lane with a hedge being planted immediately alongside. This has been partially successful to date as the previous three or four fly-tips per week have been reduced to about three a month.  We do know that some of these are repeat offenders; one builder and one gardener are very evident. We are working on ways to identify and fine such individuals. 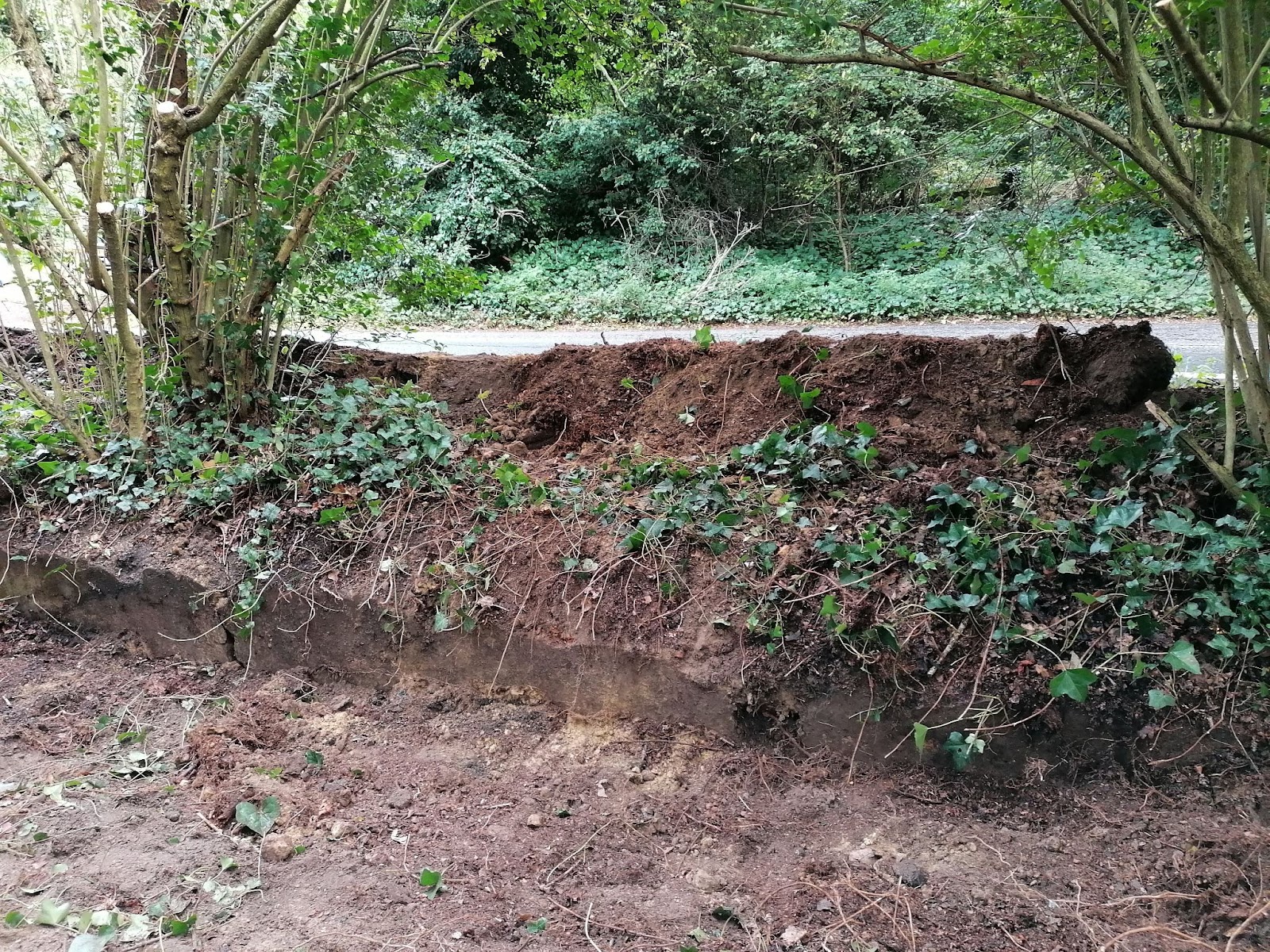 Although, we cannot say for certain, yet, where the house, known locally as the ‘Chinese villa,’ was located, we have exposed various garden features. The first to be uncovered was  a round pond near the two cedar trees which has, we believe, the remains of a ‘pagoda’ and the pagoda walk is being opened up giving a vista to the fields. The pond is surrounded by a laid brick path and we think we will find more such laid paths buried by soil. 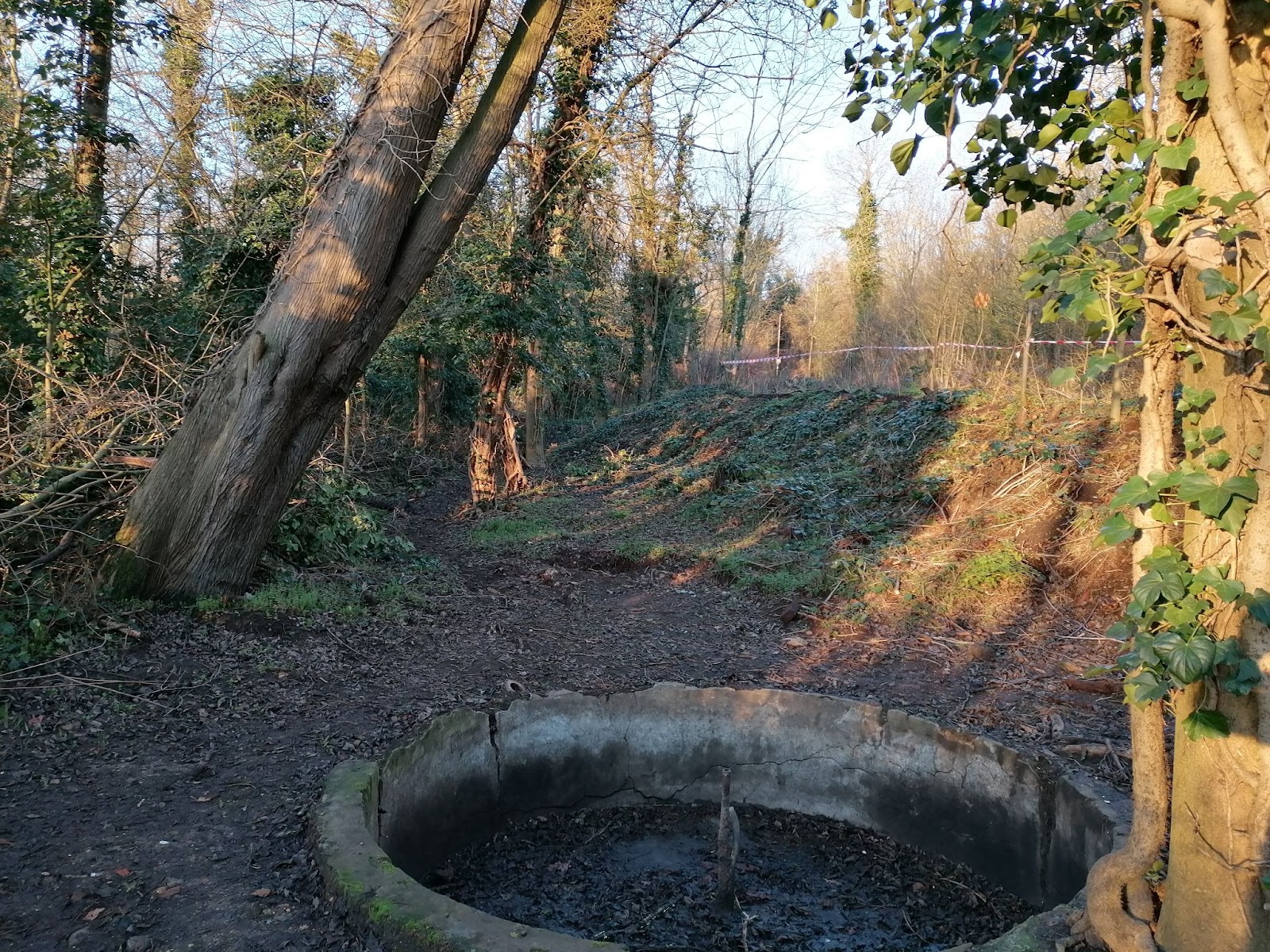 Stretches of the pathways and evident flower beds are marked by rough stones and are likely to cover much of the area.

There is a rockery on the slope by a series of steps leading down to a ‘dry gully’ which is blocked to the north by a high wall.  This is lined with forsythia, currently flowering in the light for maybe the first time in years. 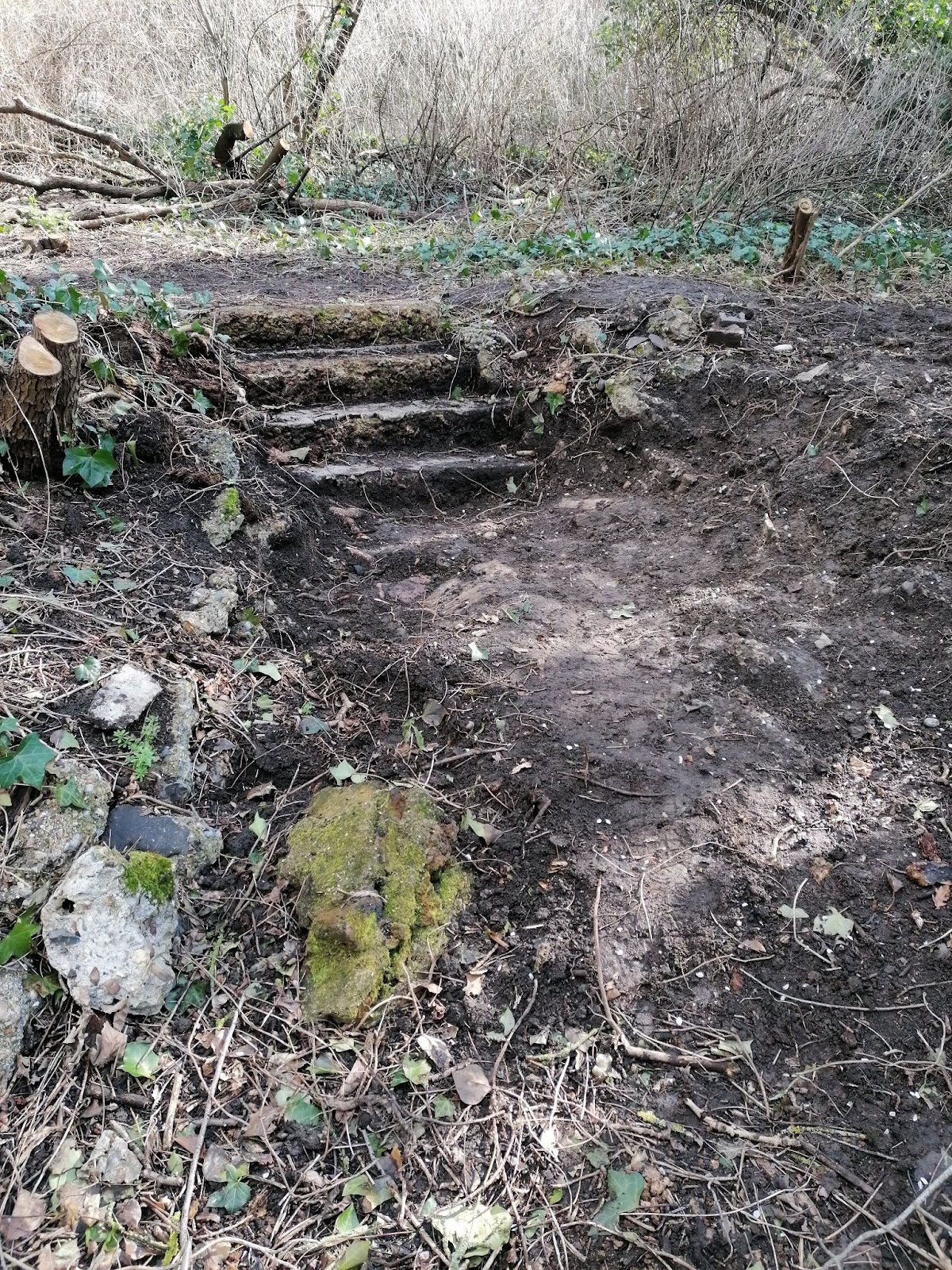 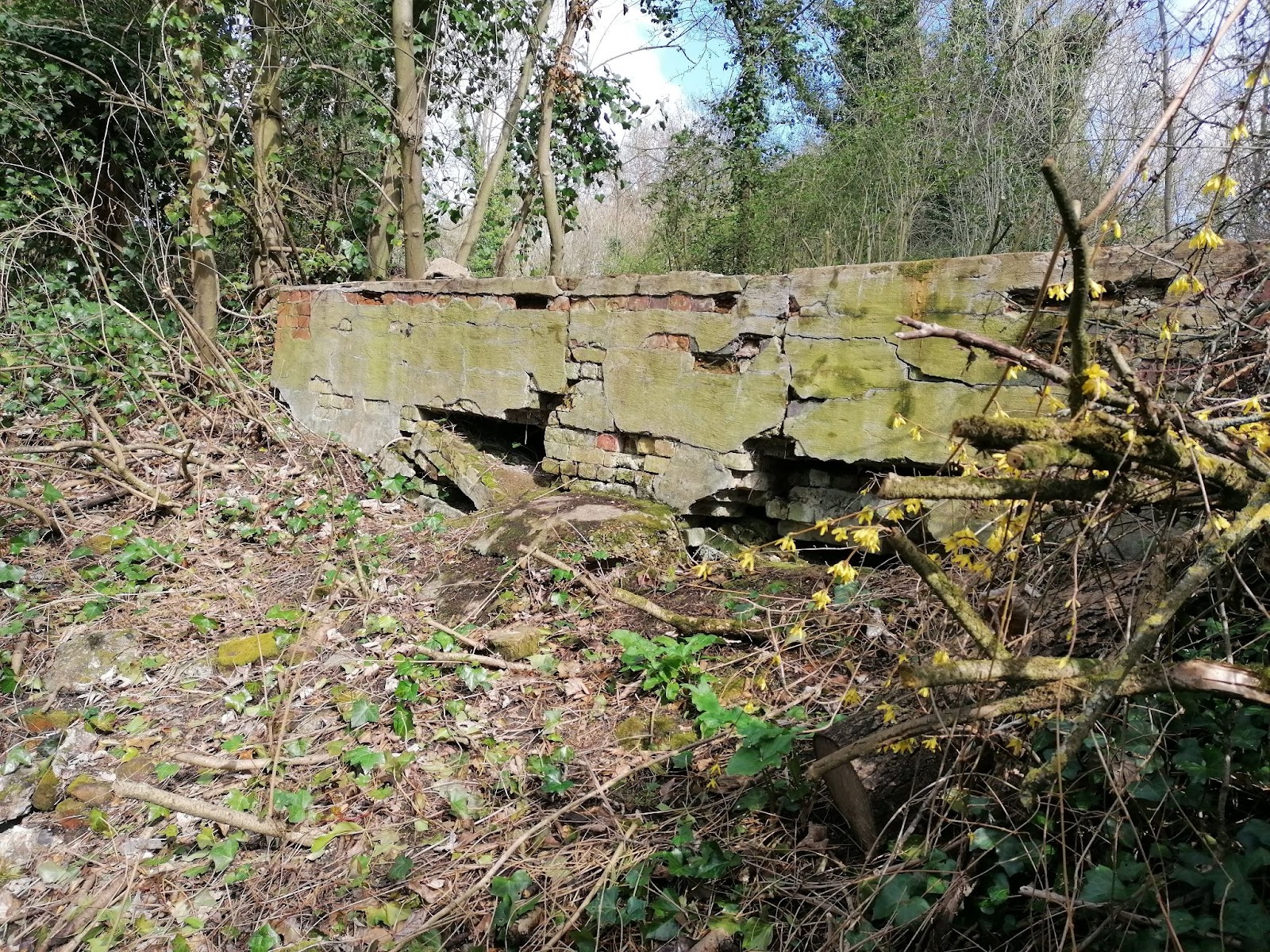 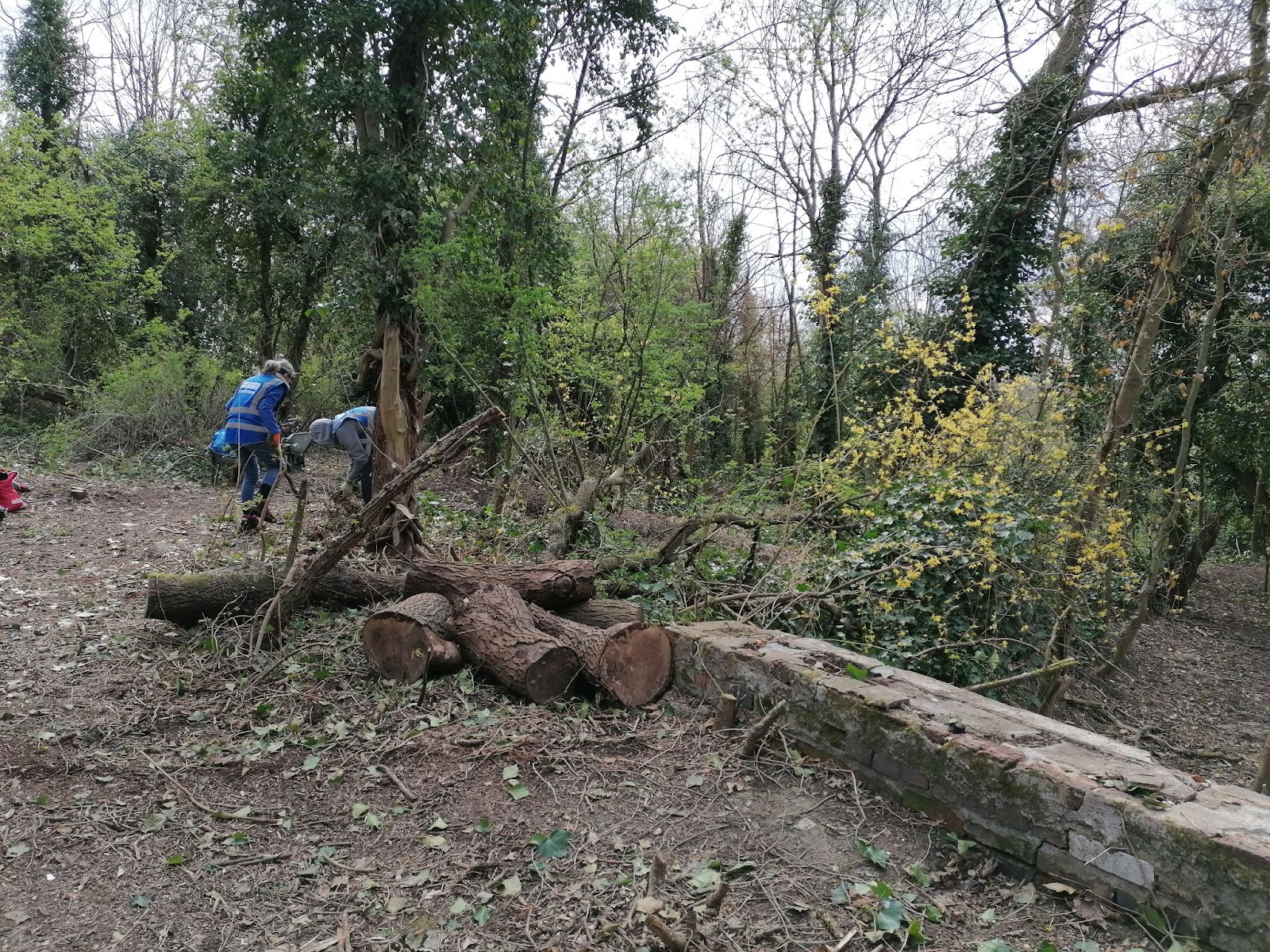 Some very pretty trees line the path which leads to what we are calling ‘the arbour’. This, some have suggested, was an ice house but the evidence of a fire in the centre seems to support the notion of a warmed greenhouse with a domed roof. Evidence of decorative tiling and thick curved glass together with other relics has been kept at the farm.. 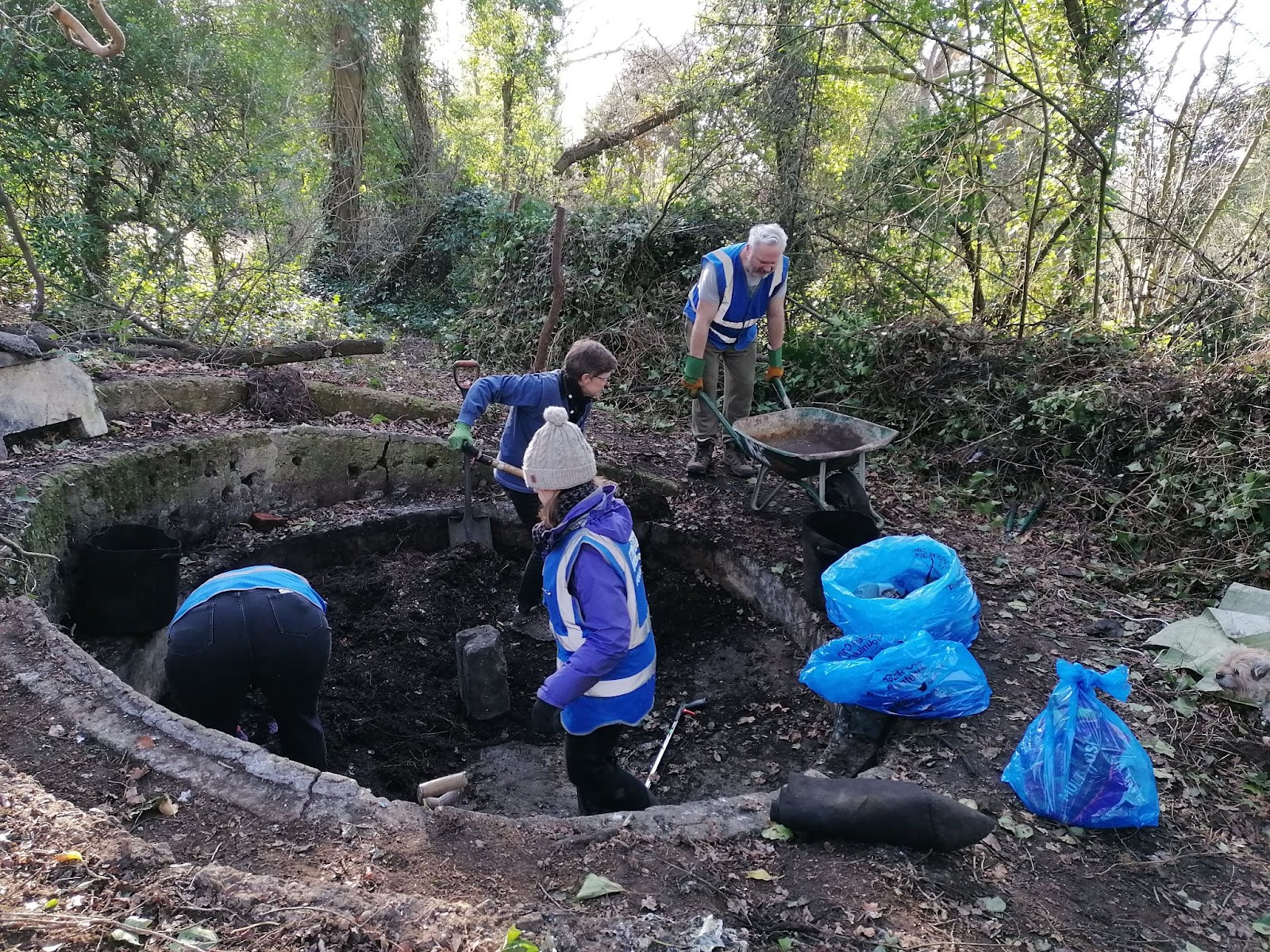 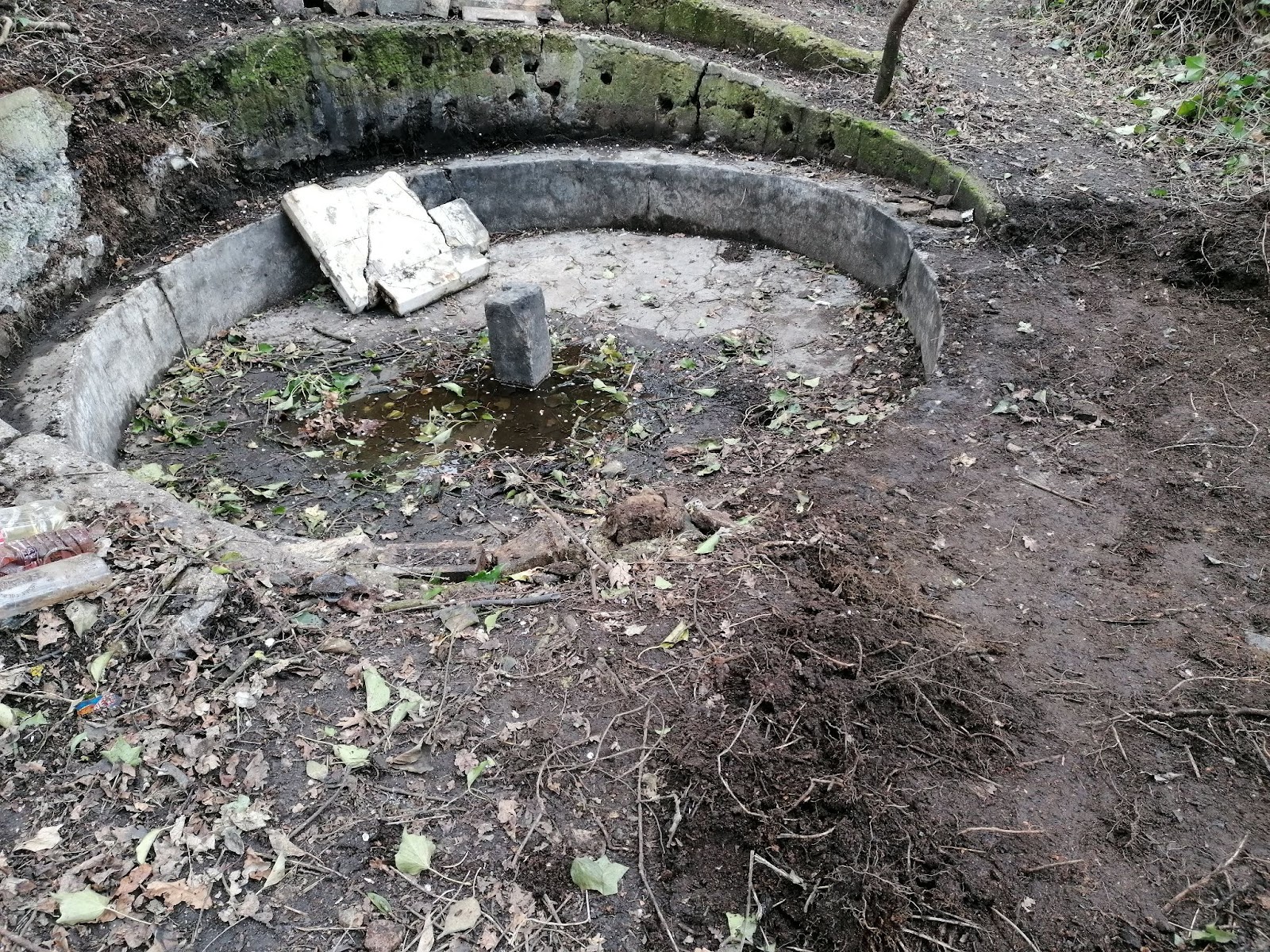 Opposite the old summit car park, there are extensive ruins of what we know from historic maps was a large greenhouse. 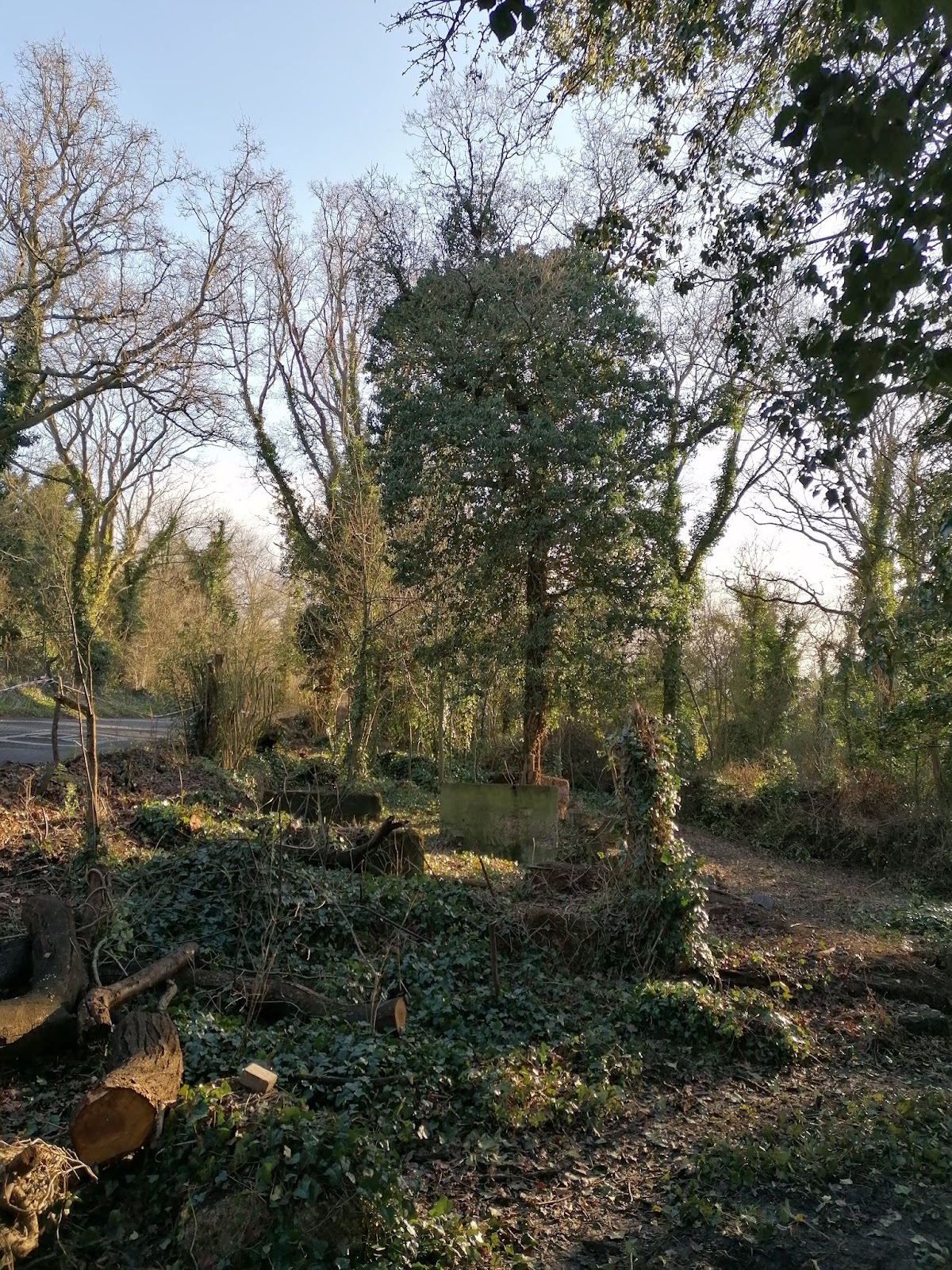 Another partially cleared feature of very decorative ponds with an island is by the original path. This will hopefully be cleared out this spring.  At the western end of the woods,Jon has thinned the trees in an area, exposing it to sunlight to encourage the growth of woodland plants such as wild garlic. We have protected it  by building a dead hedge of cut branches all around.  We are asking that people do not enter this ‘corral’ to give plants the chance to grow and establish. At one corner is the well, which is more evident now, and following that path towards the fields leads to an ancient orchard. 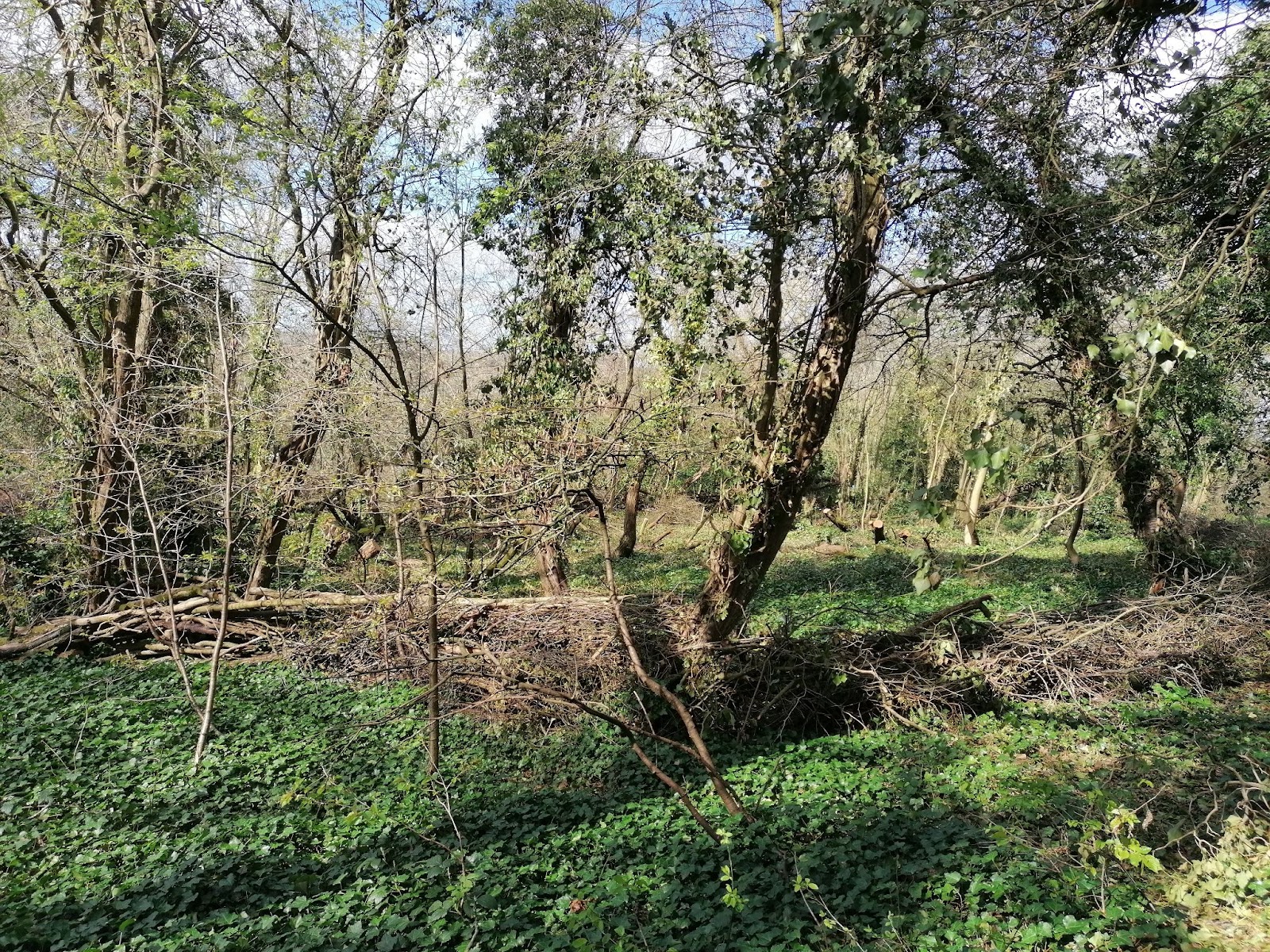 The woods are looking so beautiful with blossom and forsythia. 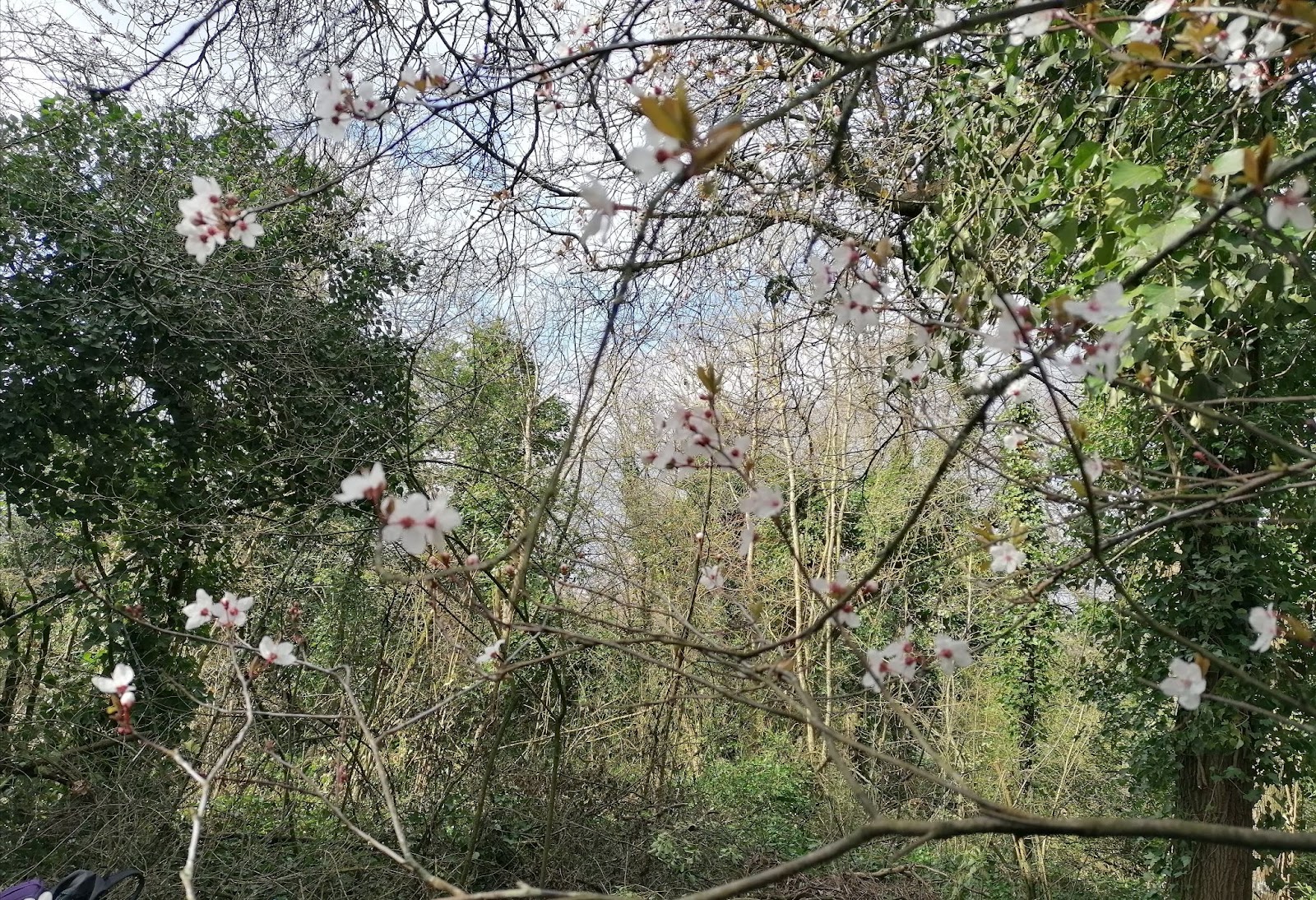 Do go and enjoy them only please walk on the pathways as we have also planted seeds for native woodland species as well as the hedging. Be aware that the ruins are old and stones might come loose so take care when exploring.  There is a great deal more work to be done to restore this woodland and the gardens properly and we will be working there for many months to come.