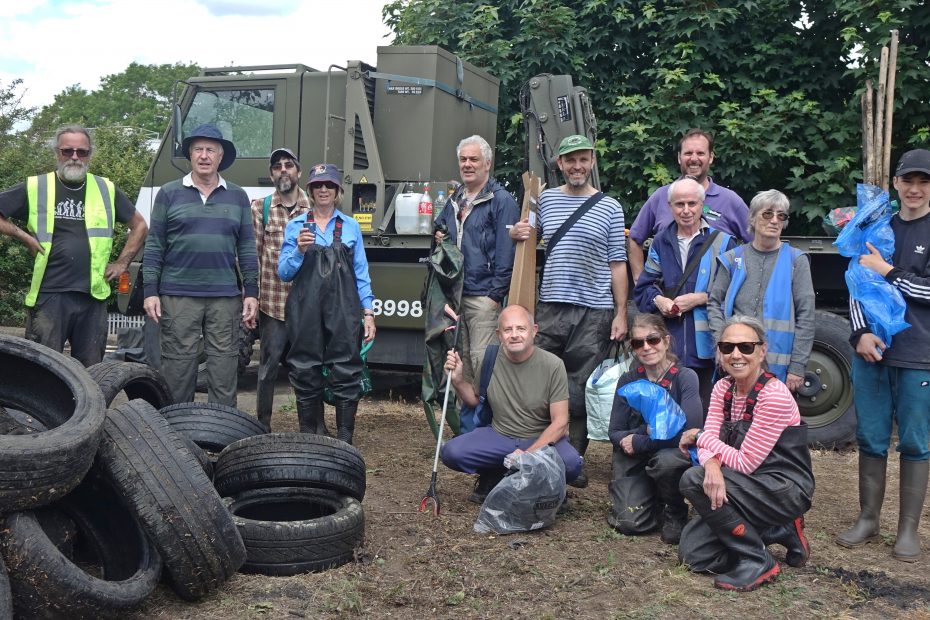 Nearly 150 fly-tipped tyres were hauled out of the River Brent during a massive clean-up by volunteers.

A 16-strong team from LAGER Can and CURB – Clean Up The River Brent, gathered on the riverbank north of the A40 in Perivale.

The session began with the shock discovery that in addition to the 50 tyres spotted on a recce some weeks earlier, another 100 were buried in oozing mud.

Volunteer Jane Branch said: “The river wasn’t deep but this was more difficult than any other river clearance because of the volume of heavy items held down by silt, which stank! These had to be removed from the river and dragged up the bank. What I did notice was how much faster and more freely the river flowed once we’d taken out all those obstacles.”

“There were safety issues,” added Ben Morris from CURB. “We were working in a heavily polluted and culverted riverbed, and there was heavy lifting required, with a toll of exhaustion and injury – mainly to backs and shoulders.”

The three-hour operation on May 22nd was made possible after the self-storage company Vanguard granted access to the river from its depot on Alperton Lane. And Ealing Council waste contractor Greener Ealing sent a crew to collect the huge pile of tyres.

Also recovered from the river were 10 bicycles, several shopping trolleys and enough rubbish to fill 55 sacks.

LAGER Can’s Cathy Swift said: “This was a well-planned and highly successful event with health and safety taking centre stage. It was extremely satisfying to partner with Clean Up The River Brent, Vanguard, Ealing Council Street Services and Greener Ealing Ltd to achieve such a great result.

“During the session we were pleasantly surprised to see an eel. It was as if it swam by to thank us!”

The clean-up was only LAGER Can’s second river operation since being accredited as a Thames 21 River Action Group. In the previous exercise over two days in March, volunteers waded into the Brent at Ealing Golf Club to recover litter and flotsam, filling 280 rubbish sacks.